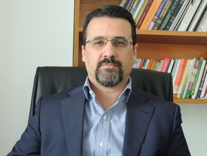 ​Mouad graduated as an Agricultural Engineer in Animal Production and received a Ph.D. in Veterinary Sciences. Dr. Chentouf is presently Research Director and Head of the Regional Center Tangier at the National Institute of Agronomic Research (Institut National de la Recherche Agronomique – INRA) of Morocco. His research focus is on animal reproduction and genetics, and production systems analysis. He has numerous scientific publications on these topics and has coordinated several national and international research projects. He is also an invited professor of animal production and serves as an expert in several scientific committees.

Livio graduated in Veterinary Medicine from the University of Maranhão, Brazil, and obtained a Ph.D. in Parasitology from the Federal University of Minas Gerais, Brazil, with a collaborative period in Ludwig-Maximilians-Universität München, Germany. He was visiting professor at the United States Department of Agriculture, US and The University of Edinburgh, UK. He has been studying compounds to control animals' gastrointestinal nematodes. He has been an academic advisor for several Ph.D. and Master’s thesis.​

Hector received a Master of Science (MSc) in Ruminant Nutrition from the National Autonomous University of Mexico (Universidad Nacional Autónoma de Mexico – UNAM) and a Doctoral degree (PhD) in Veterinary Medicine with a concentration in Ruminant Nutrition from the University of Murcia, Spain. Since 1985, he has been working as Professor-Investigator at the Autonomous University of Queretaro (Universidad Autónoma de Querétaro – UAQ), and is presently serving as Coordinator of the University Campus and Agricultural Research and Teaching Center of the Faculty of Natural Sciences.

During his academic career, he has so far directed 30 students’ theses (Bachelor, MSc and PhD) in the area of goat production and goat milk quality. He is the area editor for Ruminant Nutrition of the journal Archivos de Zootécnia and a member of the editorial board of Agricultura Costaricense. He has given more than 130 presentations at national and international congresses and has taught university-level courses in goat nutrition in Brazil and Peru.

Hector is currently the vice-president of the Latin American Association for the Production of Small Ruminants and Camelids and has served from 2014-2016 as President of the Mexico Association of Goat Production (Asociación Mexicana de Caprinocultura (AMPCA) and from 1994-2000 as President of the Local Association of Goat Farmers. He is currently developing a project for the rescue of the Black Creole Goat of the Bajio region in the states of Querétaro and Guanajato as a source of important genetic germplasm, and another project focusing on the valorization of alternative resources for the feeding of goats in semi-desert environments.

​Abner A Rodríguez-Carías - Americas (Mexico, Caribbean & Central America)
​Abner A Rodríguez-Carías, Professor of Animal Science at the University of Puerto Rico, Mayaguez Campus (UPRM), received his Ph.D. degree from Michigan State University.  He received his M.S. and B.S. degrees from UPRM where he has been a Faculty member for 24 years with teaching, research, and extension appointments. Currently, he is a consultant of the Puerto Rico Department of Agriculture Small Ruminant Production Fund. Dr. Rodríguez has been an academic advisor of 29 graduate students that have obtained their M.S. degree and of over 100 students who conducted undergraduate research. He is been very active in research activities with the UPRM Agricultural Experimental Station, Federal Agencies (USDA), other Land Grant and 1890 institutions, and the private industry sector, and has been a volunteer of the “Partners of Americas” and “Winrock International” Farmer to Farmer Program sponsored by USAID, in Latin America (Republics of Guatemala and Nicaragua), and Asia (Bangladesh). Dr. Rodríguez is author or co-author of over 40 peer review publications and over 150 research reports and abstracts on small ruminant production, ruminant nutrition or silage production. He has been an invited speaker at national, regional and international congresses.

He initially worked at the Agricultural Experiment Station at the University of the Virgin Islands on St. Croix and has been a research scientist at the Agricultural Research Station of Virginia State University since 1992.  His research has focused on small ruminant breed evaluation, accelerated mating, assisted reproduction, and more recently on pasture-based production systems.  Stephan also has an interest in small ruminant breed resource preservation and serves as chair of Small Ruminant Advisory Committee of the USDA National Animal Germplasm Program. He has served on the editorial boards of Small Ruminant Research and the Journal of Animal Science. 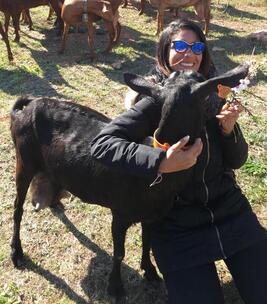 Clara Viviana graduated with a Master’s Degree in Biology and an undergraduate degree in Animal Science from the University of Antioquia, Colombia. She presently works as a Master Researcher for the Colombian Corporation for Agricultural Research (Corporación Colombiana de Investigación Agropecuaria - AGROSAVIA) at the Motilonia Research Center. Her lines of research are nutrition and animal feeds and the productive and socioeconomic evaluation of sheep and goat production systems.

Before becoming the IGA Regional Director for South America, Clara Viviana held the post of IGA Country Representative for Colombia, along with Dr. Venus Appel. She is presently leading the organizing committee of the 2021 Latin American Association of Small Ruminant Specialists and South American Camelids (ALEPR&CS) congress that will take place in Valledupar, Colombia, in 2021.

Clara was the secretary of the Sheep and Goat Production Value Chain of Antioquia from 2009 to 2015. She has also held the position of Inter-Administrative Coordinator at the National University of Colombia in Medellín to provide services for the evaluation of the productive characteristics and genetic improvement of goat and sheep. Additionally, Clara Viviana has been Coordinator, Technical Advisor, and Technical Assistant of various projects financed by entities such as the Government of Antioquia, the Ministry of Agriculture and Development of Antioquia, National University, La Salle University, Corpoica and the Colombia Association of Goat and Sheep Producers.

She has also been a Lecturer at Lasallista University in Antioquia and the National University of Colombia in Medellin where she taught Non-Traditional Species I, Small Ruminants and Sheep and Goat Production.

Clara has published refereed articles and technical manuals. In 2019, she published ‘Goat Production in Colombia’ in Tierras Caprino from Spain. Additionally, Clara recently wrote a technical manual (Manual Técnico de Producción de Leche de Cabra) about the production of goat milk using good management practices. It is posted on the IGA blog and available through the March 2018 – IGA Newsletter. She has made presentations and has participated in courses, congresses and seminars in Colombia, Mexico, Central and South America and the Caribbean.

Jun Luo obtained his B.S. degree in Animal Husbandry, M.S. degree in Animal Production and Ph.D. degree in Animal Genetics and Breeding from Northwest Agriculture and Forestry University of China. ​He is currently a professor in the College of Animal Science and Technology of NWAFU and the director of the Dairy Goat Committee of the China Dairy Association. Jun Luo is a member of the Sheep and Goat Resource Committee.

His research interests focused on dairy goat breeding and reproduction, the developmental utilization of goat breeds resources, and the molecular genetic mechanisms of goat milk fatty acids metabolism. He is also actively involved in dairy goat extension and industry development in China and research collaboration with international partners.

​Muhammad received his Ph.D. in Veterinary Parasitology from the University of Agriculture Faisalabad in 2003, AMBO certificate from the Riken Institute, Saitama, Japan, and Special Diagnostic Training from VRI Lanzhou, China, Advanced Molecular diagnostics from NIBGE, Pakistan and ParsCo from University of Bari, Italy.

Currently, he is working as Assistant Professor in the Laboratory of Parasitic Chemotherapy and Vector-Borne Disease, Parasitology section at the Faculty of Veterinary Sciences, Bahauddin Zakariya University (BZU), Multan, Pakistan. He has completed his Administrative responsibilities as member of the Faculty Board. His research has included immunology, Protozoology, Biotechnology for Parasites, haemo-protozoans, and helminths in large and small ruminants.

Based on this research and fellowship training, he has received several awards and honors, such as Star Asia Award, Mem. R.E.S (London), Fellow ParsCo (Italy) and Country Representative (CR) of the International Goat Association (IGA). He also serves as an editorial member/editor of several international reputed impact factor and non-impact factor journals. He has authored more than 80 research articles and 12 books and laboratory manuals. He is a member of several national and international societies/ bodies including IGA, Royal Entomological Society (London), RSTMH, ASTMH, Entomological Society of America (ESA), and the Pakistan Society of Parasitologists. He authored a book chapter in Goat Science ISBN 978-953-51-5495-2 (Intech Publisher) etc.

Emilia works for the Polish Academy of Sciences in their Institute of Genetics and Animal Breeding. Her research areas include quantitative genetics, transcriptomics, epigenetics, and milk quality. Before becoming a Regional Director, Emilia served as the IGA Country Representative for Poland.

Together with her team, Emilia confirmed the contribution of antimicrobial peptides in defense of dairy cow mammary gland against bacterial pathogens and selected genes with varied expressions in udder with Staphylococcus infection. It was one of the first studies in the world with microarray method concerning expression profile of genes involved in cow mammary gland defense against Staphylococcus bacteria. These genes are currently under analysis in epigenetic studies.

In collaboration with another IGA member, Prof. Jarosław Kaba (WULS-SGGW, Vet. Med. Faculty), she established an influence of SRLV infection on the expression levels of cytokines and acute phase proteins in blood leukocytes and milk somatic cells on the mRNA and protein levels.

Emilia is the Secretary of the Scientific Council for IGAB. She is the co-founder and co-editor of the website Kozi Serwis. She is supervising three Ph.D. students. She is also co-author of two patents: No. PL406168 and PL405282.

The Scientific Council of IGAB PAS and Agricultural, Forestry and Veterinary Sciences Division of PAS highlighted Emilia’s Ph.D. and habilitation thesis. She was awarded the Gold Cross of Merit. She has more than 300 scientific papers (approx. 80 on JCR list), 20 reviews, 50 popular papers, 8 book chapter, and 170 conference reports. ​

Francisco’s research experience is focused in the field of sustainable management of small ruminant systems and the marketing of their products. He has developed his work in different research centers and universities, including the University of Seville (Spain), the Agency for Agricultural Research in Sardinia (Italy), the French Livestock Institute (France) and in his current research center, the Andalusian Institute of Agricultural Research and Training.

Francisco is a member of the FAO/CIHEAM Subnetwork of Sheep and Goat Systems and a reviewer of scientific articles for various journals. Also, he is the Coordinator of the Shepherd School of Andalusia. He currently holds the position of Technical Specialist A – Area Agricultural Economics and Sociology of the Andalusian Institute of Agricultural Research and Training (IFAPA).

Francisco has published articles in scientific journals such as Small Ruminant Research, Agroecology and Sustainable Food Systems, Science of the Total Environment, Journal of Cleaner Production, etc. He has also written ten book chapters and has made more than 100 conference presentations. The article he wrote, ‘’The Situation of Dairy Goats in the World – Situación del Caprino de Leche en el Mundo” has been posted on the IGA website, along with an interview by OVIEESPAÑA about “The Potential of Indigenous Goat Breeds and the Increase in Consumption of Cheese – El Potencial del Caprino son las Razas Autóctonas y el Aumento en Consumo de Quesos”.
​
Read more information from Francisco de Asis Ruiz Morales