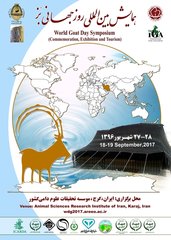 We would like to inform potential participants, sponsors and other concerned people, that the organizing committee of World Goat Day has decided to reschedule the event date to ensure all preparations have been made. The venue and the timing of the meeting remains the same, it is just the date that has been postponed. The symposium date has been shifted to September 18-19, 2017. Pre-symposium workshops and post-symposium tourist programs will be done on September 16-17 and September 20-22, respectively.​

Visit their website at: http://wdg2017.areeo.ac.ir
​A Celebration of the First Domestication of Goats and the Contribution of Goats Today

We are very happy to announce that World Goat Day 2017 will take place in Iran!

The success of “National Goat Day” in January 2016 showed the importance of goat production in Iran. Throughout the region and most of the world, goats continue to enhance the quality of human life. As we saw during the 12th International Conference on Goats in Turkey, there is global interest to learn from other researchers, producers, processors and other actors throughout the value chain.

Now, the Organizing Committee will convene, and a specific date will be set. We will keep you informed as we gather more information.

We know World Goat Day will be a great success, and we look forward to joining in the celebration.
​
What is World Goat Day and why Iran?
The archeo-zoological evidence suggests that Iran is one of the most important regions of sheep and goat domestication, and may be where the first domestication took place. Iran has a long and proud history of livestock keeping, and is well known for its many breeds that are adapted to different environments.

According to the most recent statistical reports from the Ministry of Agriculture of Iran, there are over 20 million goats in Iran, valued at around 4 million Iranian Rials/head. More than 80000 billion Iranian Rials (~ 2.5 billion US$) has been invested in this sector in Iran by private entities (mostly Rural and Nomads farmers) and the government over the past 35 years, which is a considerable investment when compared to other livestock species.

Goat breeding plays an important role in the national development of Iran, by providing the following benefits:
National Goat Day provided an opportunity to reflect upon the important role of goats in Iran and in many other countries of the world, not only in food security, but also for employment, income, rural development, environmental management and cultural traditions.

Goats are increasingly appreciated because of their high adaptability to a wide array of environmental conditions, and their ability to thrive on “low quality” feed resources through selective feeding. The emerging challenges associated with climate change, the increasing pressure on natural resources and the high value of goat meat and milk across a number of Asian countries increase the socio-economic importance of goats. We must understand and protect existing goat genetic diversity to meet the needs for the future.

As noted in the 2014 Food and Agriculture Organization of the United Nations (FAO) Statistical Yearbook, the Near East and North Africa account for the smallest share of global livestock and meat production of any of FAO regions. Within that region, however, Iran leads red meat production with more than one million metric tons annually. Furthermore, Iran is the region’s third largest producer of sheep and goats. Challenges such as infectious diseases and obstacles to value chains limit benefits derived from sheep and goats in the Near East and North Africa, so policies supporting innovation and investment are essential.

FAO’s research indicates that livestock supply chains are a definitive factor in mitigating and adapting to climate change. Goats will be important especially in the warmer, drier world of the future, and approximately 90 percent of all of the region’s goat breeds are from drylands. They are a valuable yet untapped resource for future adaptation to climate change. As an example, the Adani dairy goat is one of the most important breeds in southern Iran, and it is well adapted to severe conditions. Despite high temperature, humidity and lack of good pasture, the breed performs well and has been regarded as an excellent animal for the export market. Likewise, Yazd province is one of the driest areas in the central part of Iran with less than 100 mm of annual rainfall, but the local Nodoshani and Rabati goats produce high-value milk and cashmere.

Sheep and goat products are especially important in developing countries where 45 percent of all sheep meat, 54 percent of all sheep milk, 93 percent of all goat meat, and 73 percent of all goat milk are produced. With adequate investment in value chain integration, we could increase the productivity and stability of livestock production in varied ecosystems. Furthermore, because livestock species are closely linked to the social and cultural lives of several million resource-poor farmers, investing in small ruminant species, principally goats, could contribute to sustainable farming and economic stability for the future.